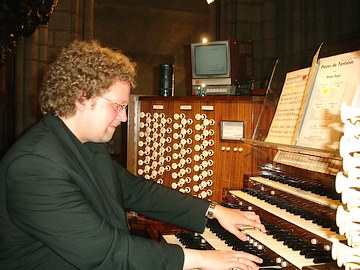 Aarnoud de Groen (The Hague, 1971) received his first organ lessons at the age of 9. The first rudiments were taught to him by the organist Jan van Westenbrugge. After this he continued his studies with Everhard Zwart.

In 1983 he was advanced enough to accompany services at the Christelijke Gereformeerde Kerk in Rijswijk and shortly afterwards was appointed organist.

In 1984 he made his debut as a concertorganist in a series of concerts on the organ of the Hervormde Kerk in Pijnacker.

In 1985 he was accepted into the combined school and music programme at the Royal Conservatory of the Hague.
At this institute Aarnoud studied with Rienk Jiskoot. He also took interpretation classes with Ben van Oosten for some time.

In 1990 he was appointed as organist of the Julianakerk in The Hague. Aarnoud de Groen is also the official accompanist of the Christelijk Residentie Mannenkoor.

Due to the closure of the Julianakerk in 1997 the Vierdag organ was relocated to the Bethlehemkerk in The Hague and Aarnoud de Groen moved there too with 'his' instrument.